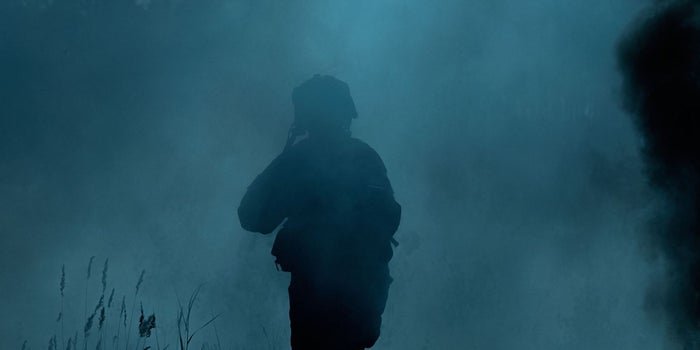 One former soldier’s story of envisioning his path ahead while stationed overseas.

As I sat there in the cold rain for the fourth straight day, I contemplated the reason I signed up for this. It was 1987, and I was sitting on the border between West and East Germany serving in the U.S. Army, 8th Cavalry. I’d been watching a bunch of nothing for days on end, hoping to see some movement just to break the monotony and get a break from the rain beating down like a soft, monotonous drum. My eyes were heavy and my pulse very slow, the warmth of my wet poncho liner was all but gone, and I was shivering, but I had to stop and remember: “This is the job, this is part of the sacrifice.”

It was moments like these when I had no choice but to stare into the blank canvas of my future and begin painting what lay ahead. First, I pictured myself never being in such a situation again, one where my life’s purpose and focus were dictated form an outside source. I was serving in the military to protect and, if needed, fight for freedom, yet here I was — tied down, unable to execute even the smallest decision about my situation.

I dug deep and envisioned that blank canvas, one I could change with a few short strokes of the brush in my mind, so I did just that. I began painting my dream of owning a bar and club in Germany, one that was the epitome of my American roots. The solid mahogany bar and rails, the stacked bottles of spirits, the conversation and return guests who just loved the place.

Was this meditation? Possibly. Was it a fantasy to think I could paint my own future? At the time, I was not so sure, but I did it anyway and I never stopped. Five years later, I was sitting in Berlin after leaving the military. After painting hundreds of renderings of my future, I had finally arrived. I went to work, and it was almost effortless. In less than three years, I had opened two bars and a club, became well-known in Berlin and even wrote a best-selling book about my time in the military and my personal journey.

Fast forward 30 years. Looking back now I now realize that those moments of concentration during deployment were exercises in conscious creation, in forgetting my thoughts. In painting the future, I was creating my reality. This has since become a daily activity for me and has led me to the most incredible places on the planet, where I’ve met the most interesting and inspirational people and created lifelong relationships that I cherish greatly.

I now have a method to the madness, although I still cherish those moments in the past when I had no choice to be somewhere and stare into nothingness, because it taught me that planting a seed, watering it and watching it sprout and expand reaps massive benefits. Now, my day starts with a meditation session where I recall my latest painting and add to it, polish and groom it. In order to make this into a habit and create an even deeper-seeded certainty, I journal what I painted, and then put that in an audiobook as a way of further reinforcing the messages needed to make that painting come to life.

What about you? Are you letting go of the conscious weight of your mind? Are you embracing what already is instead of what you think? Do you have a process to put your dreams to good use, see them develop into certainty and grow into reality? Here are are three things you can do on a daily basis to ensure you are always creating:

You can even make a vision board with photos and ideas for your dream, treat it as your journal and embed that reality into your consciousness and watch it unfold in front of you.

Looking back, I took a situation that was completely out of my control and turned it into a machine to produce dreams. As I ponder those days staring into East Germany waiting for the Russians to attack, I am touched deeply by my belief that anything is possible. I still believe anything is possible and have proven it to myself over and over, yet now it is a conscious and practiced effort, where back then it was simply me dreaming and hoping,

Register Below To Download Your FREE Guide Now.
From STEVEN KUHN, THE CONSIGLIERE OF BUSINESS AND POLITICAL INFLUENCE

Get Out of The Weeds and Start Making Money FAST.

From STEVEN KUHN, THE CONSIGLIERE OF BUSINESS AND POLITICAL INFLUENCE